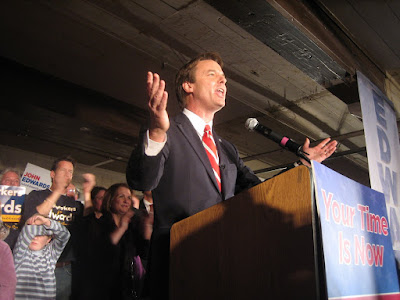 As Elizabeth Edwards took the stage in a converted mill in Manchester, the unlikely campaign song of "Firecracker," by Ryan Adams, blared through speakers, across a stretch of flag-waving supporters, and into Wolf Blitzer's CNN Situation Room.

"Well, everybody wants to go on forever. But I just want to burn up hard and bright," the North Carolina native sang.

It wasn't the message Edwards wanted to convey—that he's in this for the long haul, from his days as a mill worker in Robbins, N.C., to the day he takes office in the White House. In his concession speech on Tuesday, he told supporters and television viewers that he was "in this race through the convention, and I intend to be the presidential nominee of my party."

But a song about going down in flames of glory might describe Edwards' shift of momentum from squeaking by Hillary Clinton in the Iowa caucus to landing at the bottom (of the top) of the Democratic heap in New Hampshire.

[View the entire article at the Independent Weekly.]
Posted by Matt Saldaña at 1:44 AM
Email ThisBlogThis!Share to TwitterShare to FacebookShare to Pinterest
Labels: election2008, indyweek
Newer Post Older Post Home