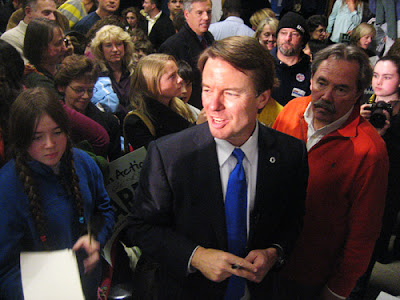 Twenty-eight hours into a blistering, 36-hour campaign tour of New Hampshire, John Edwards told a group of several hundred onlookers packed into a high school lobby in the southern coastal town of Hampton, that "we're going to surprise people tomorrow."

By the time you read this, tomorrow will have arrived, and the New Hampshire primaries will be over. Polls show Barack Obama and Hillary Clinton with sizeable leads over Edwards in the Democratic field. But pollsters have a tricky time predicting behavior in New Hampshire, where more than 40 percent of the population is unaffiliated with a party, and many consider candidates until the final hour.

A CNN/WMUR poll released late Sunday, for example, placed Edwards at 16 percent—far behind Obama and Clinton—but it tallied a mere 6 percent of likely Democratic primary voters who were still undecided. According to many in New Hampshire, that number may be misleading.

[View the entire article at the Independent Weekly.]
Posted by Matt Saldaña at 1:36 AM
Email ThisBlogThis!Share to TwitterShare to FacebookShare to Pinterest
Labels: election2008, indyweek
Newer Post Older Post Home