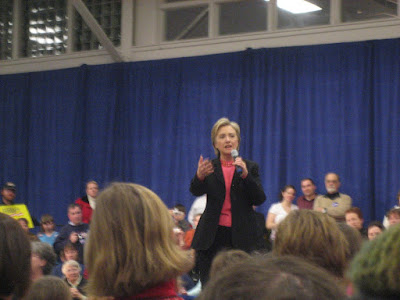 Nearly every candidate here has used the term “famously independent” to describe New Hampshire’s voters. Indeed, a majority of the state’s voters are unaffiliated and can cast ballots in either the Democratic or Republican primary. For the “undecided”—and there are still many in New Hampshire—these last few days of campaigning provide a final opportunity to make up their minds. Many will wait until Primary Day to do so, and the results may not reflect national trends or polls. In 2000, for example, John McCain—supported by 62 percent of the independent vote—defeated George W. Bush handily in New Hampshire.

At a town-hall speech in Portsmouth last Friday, John Edwards—trailing Sens. Barack Obama and Hillary Clinton in national and local polls—appealed to the state’s culture of autonomy:

“We’re going to continue to be outspent. They’re going to spend all the money in the world in New Hampshire,” he said, referring to Obama and Clinton. “But what’s going to happen on Tuesday is you’re going to rise up and say, ‘We don’t want to be told what to do.’”

[View the entire article at the Independent Weekly.]
Posted by Matt Saldaña at 1:32 AM
Email ThisBlogThis!Share to TwitterShare to FacebookShare to Pinterest
Labels: election2008, indyweek
Newer Post Older Post Home