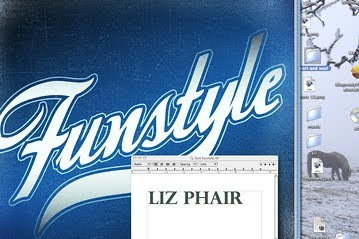 Following Liz Phair's surprise release of 'Funstyle,' her first album of original material since 2005, I wrote a review of the album for The Wall Street Journal's Speakeasy blog, then followed up with a previously unreported story on how she left her record label in the process of making it. Both articles are excerpted below.

Liz Phair is expecting that record-company executives will hate her new record, a self-parodying mélange she posted on her Web site this week with little fanfare. Mockingly titled “Funstyle,” the surprise release is a schizophrenic, sample-heavy affair that alternates between crushing self-doubt and music-industry rancor.

Following last week’s surprise release of “Funstyle,” an online-only album that vents frustration at the recording industry, rocker Liz Phair has posted an instructive note on her website, titled “How To Like It.” In it, she announces that “Funstyle’s” songs have caused her to “lose” her record deal, management, and “a lot of nights of sleep.” “Love them, or hate them,” she writes of the new tracks, “but don’t mistake them for anything other than an entirely personal, un-tethered-from-the-machine, free for all view of the world, refracted through my own crazy lens.”

On one such un-tethered track, Phair imagines an agent telling her “Funstyle” amounts to “career suicide,” and that “ATO will never put this out.” According to Phair, the latter point at least appears to be true.

In an e-mail to Speakeasy, Phair insisted there are “no hard feelings, only circumstances” that led to her split—“almost a year ago”—with ATO Records. The label, co-founded by Dave Matthews, signed Phair in 2008 and re-released her acclaimed and influential debut album, “Exile in Guyville” later that year. Billboard reported at the time that a new studio album was “penciled in” for the fall of 2008, though “Funstyle” marked Phair’s first album of original material since 2005’s “Somebody’s Miracle,” released on Capitol Records.