[indyweek] Durham fails to hold the line on Jordan Lake 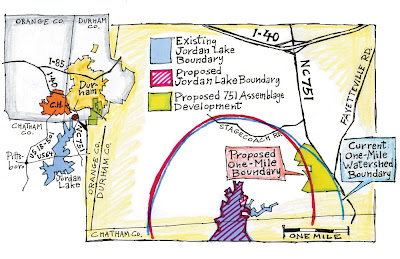 But besides the paperwork and political hurdles that normally accompany a proposal to change the zoning designation on a piece of land, there was one other big obstacle lying in the path of his vision: Jordan Lake, a drinking water reservoir whose shores are protected by stringent environmental regulations enacted and enforced by both the county and the state.

The property sits along N.C. 751 within a mile of the lake's shoreline. That means it falls inside the "critical watershed" where the high-density development proposed by Hunter is prohibited. That is, unless you disagree with where the lake ends.

In 2005, Hunter did just that. He commissioned a private survey that pushed the lake's 1-mile radius boundary westward by more than 100 acres. The new line conveniently excluded Hunter's property, clearing the way for the "751 Assemblage" project, which calls for 1,300 dwellings and 600,000 square feet of combined office and retail space.

Hunter submitted the new survey to Durham planning officials, along with a request to relocate the official boundary. In January 2006, they obliged him.