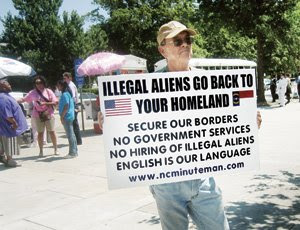 On the Bicentennial Mall outside the legislative building last week, a dozen immigration activists and conservative lawmakers delivered a series of red-meat tirades against undocumented immigrants, blaming them for drunken driving, gang warfare, crowded emergency rooms—and even, some insinuated, the fall of civilization.

Their rhetoric was designed not only to inflame, but also served as code: In trumping up the social and economic threats allegedly posed by undocumented immigrants, groups such as the Minutemen and Americans for Legal Immigration are tacitly justifying violence among activists—should it erupt—as the cost of defending America.

[View the entire article at the Independent Weekly.]