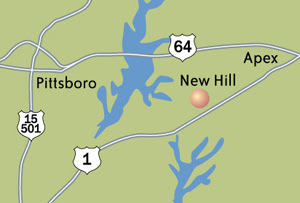 Citizens have less than one week to comment on a draft Environmental Impact Statement on a controversial wastewater treatment plant proposed for New Hill, a primarily African-American community in unincorporated western Wake County.

"Why did they choose this site? When I get up in the morning and I look at myself in the mirror, I know why they chose it," said Louis Powell, an African-American resident of New Hill.

The controversial $327 million project has a long history. The towns of Cary, Apex, Morrisville and Holly Springs, and the Wake County portion of Research Triangle Park, formed an alliance, Western Wake Partners, to determine the best place for a sewage treatment plant. In 2006, they issued an Environmental Impact Statement concluding that the unincorporated town of New Hill was the best place to flush their waste—despite reasonable alternatives in underpopulated areas near the Shearon Harris nuclear plant.

However, that EIS elicited citizen outcry as well as criticism from state regulators. N.C. Department of Environment and Natural Resources officials wrote that the report should not be considered an "accurate, complete and adequate document" because it "does not appropriately evaluate the population directly impacted" in New Hill.

In 2007, the U.S. Army Corps of Engineers took on the report so that it would comply with state and federal environmental laws.

Yet, the Corps' draft EIS, written by consultants hired by Western Wake Partners, has arrived at many of the same conclusions as the Partners' original report. Though it does not explicitly argue for locating the plant at New Hill, the report appears to pave the way for the Partners' intended outcome.